The good, the bad and the ugly.

For me personally, this was a very mixed race of positives and negatives despite having posted my first DNF in my elite career of Pentathlon and Triathlon combined. The conditions were perfect, sunshine (even had a cheeky tan when I got in the pool this morning!) but cool temperatures with as ever at Castle Coombe race the circuit – the wind picked up with every lap.

Men and women all set off at 10.30am, three and a half laps of the track would complete the first run leg of 10km, before we entered T1 to grab our bikes and set out on the 40km 13 lap bike course. I led the first 5km of the run feeling strong and together before realising my fatal error. I wasn’t wearing socks.  The trainers I was wearing I knew gave me blisters without, the last race (London) of the 2012 season they had torn my feet apart over the 10km run but as it was the last race of the year and I was about to take two weeks off  – I had pushed through.  Once I hit 5km I could feel my feet falling apart, the arches of my feet were sore and I could feel blood on my heels  so I began running on the outside of my feet – needless to say not the most efficient nor stylish running technique.  I pushed hard, determined to reach my bike and give the 40km a stab. Two girls overtook me which was frustrating, as my feet would simply not let me run despite my form feeling fantastic. 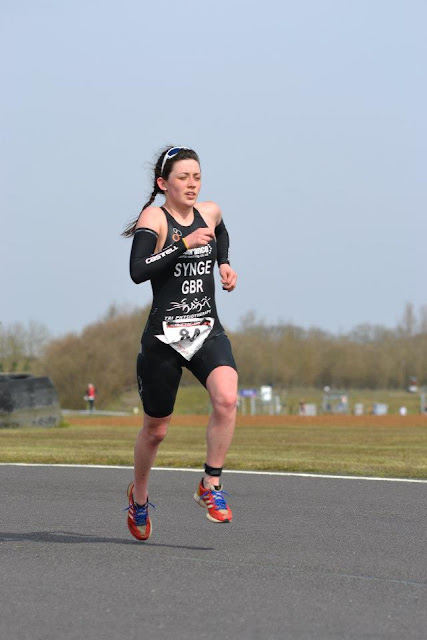 I posted a 38.44 for the 10km which considering the issue was average. I am adamant I could have run a mid 37 without this problem. I had felt fantastic when we started.  I entered T1 in third, left in second and within the first two laps of the bike had retrieved my lead which I held for the 40km putting just over two minutes into the girls behind me. I entered T2 and tried to put my trainers back on, thirty seconds later when I exited I ran 50m and stopped, pulled my orthotics out and carried them, ran another 50m before realising how stupid I was being. This was a minor race for me, categorised as a competitive training session. The season hadn't even started and I knew I would already be taking best part of a week off to let my feet heal; I didn't want it to be more than that. I retired and hobbled back to transition trainers in hand, feeling frustrated and upset. 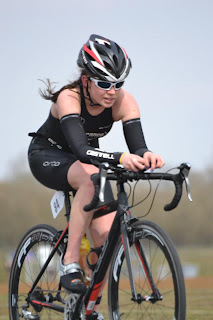 Another new change for me was the new bike, I have moved from a 48cm to a 51cm and although today I was riding my training bike (f85) as the new one (f4) hasn't arrived, it felt noticeably more comfortable and the power return seemed a little more on my side. I was therefore very happy to post the fastest female lap of the race in 5:09!

I was racing for the The Triathlon Shop – Bristol today, who had a mixed day of results! Owner and director Jon Burrage is preparing for Majorca 70.3 currently so this duathlon was a good warm up distance wise. After a good 10km, he retired during the 40km due to an injured hamstring. Get well soon boss! Matt Fisher had a great day finishing 2nd in his category, our relay team combination of Rich Shirley (bike) and Jules Richards (run) took the win in a time of 2:01, Chris Newman decided to join me 7 laps into the bike (better late than never) before going on to finish 13th overall.  A great team effort all round, as always. Even better perhaps was the support team on the side who kept us all going through the laps…you know who you are!

Dad also had a great race, after celebrating his 50th birthday the day before (this involved a four hour hike in the Brecon Beacons) he experienced his mid-life crises the eve of the race when he found out he was now classified as a supervet, but beat  his target of sub 2hr45 by 5 minutes and 7 seconds!