So, The Virgin London Triathlon, biggest Triathlon in the UK… (world?!) and my last race of the 2012 season!

If you ask anyone who was around me in the weeks building up to this race, family, housemates, boyfriend and colleagues, I was a mental mess! Head was all over the place, confidence – nowhere to be found, or maybe simply did not exist. I’ll even go as far to say that I phoned up my coach a week before and asked if I could just watch…I was so nervous and felt very out of my depth! The start list was crazy, I couldn’t believe I had been selected to race on the same start line as some of these girls. Olympians, ITU athletes, professionals and girls who have been doing this a whole lot longer than me! So it that sense, I felt privileged to be stood (or floating) on the start line alongside them.

Not to make excuses, but 5 days prior to the race I crashed my bike, going down the hill from university to town after a swim one morning, and straight back into the back of a car that stopped for a girl who walked into the road. I fell onto the car then rolled off onto the road. Skin off my knee and hands and a few days later a pain kicked in down the right hand side of my body. This restricted my final swim sessions in the lead up to the race, and on race day, I felt it very sharply during the 1500m swim, which I have no doubt prevented me swimming to my full ability. But the swim over, I tried to gain as much ground as possible during the long T1.

The cycle was lethal, from the results list, it seemed about 16 elite athletes (male and female) crashed due to the conditions on the bike course. It was torrential rain, lots of corners and roundabouts which saw ambulances all over the course, white flags being waved to slow us down through the tunnels and even an air lift. I bombed out of T1, hoping to shake off a group of girls that were close behind, and catch up with a chase pack in front. Seems the chase pack were a little too far to be caught, maybe arm permitting I would have been there, who knows. I held off the group of 3 behind for about 15km which I was pleased with, they then caught me (3v1 it was guaranteed when drafting!) and we worked together as a pack until the end (40km). I posted a 1.06 bike split which I was delighted with as a third I was cycling by myself and the other two thirds I felt I was heading up the bike group as one of the stronger cyclists there, sitting on the back very little.

T2 (10th fastest out of all elite men and women! My little claim to fame!)  went very well, and off we set for the 4 lap 10km run around the docks of London and Excel Centre. The first two laps of my run went well, but tiredness, lack of 10km racing and general “not quite there yet!” kicked in over the second half.

11th Elite Female overall…delighted! I was delighted with my bike leg, slightly disappointed with the swim and run, but again, I learnt so much and stacks to work on for 2013! Two weeks off/very easy now before winter training begins. A week will be spent chilling on the Gower in Wales (and supporting the Port Eynon triathlon on the 29th!)  and a week getting back into uni life, lectures (what are they?!) and coaching the university triathlon club again.

Thanks to everyone who has supported me through the 2012 season, I will enjoy my break and am looking forward to beginning the winter training already. Next race is BUCS duathlon (Castle Coomble Chilly Duathlon – open to the public too) on the 25th of November so I will update you all then! J In the meantime, follow me on twitter at @KatieJSynge for updates on my training and goings on!

Today was my second elite start, at Strathclyde Park in Scotland. Before I go any further, I have to say I’m really gutted with my performance, positives and negatives to take away and as always plenty to work on, but the overall outcome was disappointing. The swim had been cancelled due to water quality, and the event became a duathlon. 1300m run, 21km bike and a 5km run. The start list was high quality, ITU athletes from Canada, SA, Australia, elite duathletes (including the current world duathlon champ) also decided to have a go once they heard the swim was cancelled. 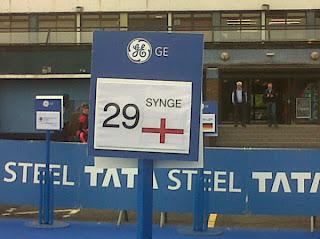 We (Dad and I) flew to Scotland on Friday evening, staying in a nearby hotel until race day on Sunday at 12.30pm. Saturday gave me time to suss out the course, do a session on the bike and run route and look around. The bike course was not flat, a couple of hills and a rocky road surface. The second run was pan flat, a two lap out and back along the loch. After a morning of briefing, registration, transition set up, the 25 or so elite women lined the start line at 12.20, and waited for our start. 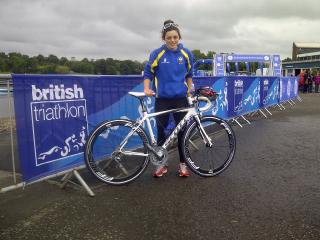 The first run was ferociously fast! An all out 1300m sprint spitting those who couldn’t quite hang on out the back. A lead group containing the Canadian and ‘proper’ duathletes quickly formed, and I sat in a chase pack of about 8 not far behind. As we came into T1 you had to be quick, precise, there was no room for error. Shoes off, helmet on, grab bike – run to the mount line. 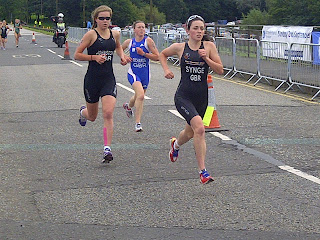 The pace at which the athletes set off from here was incredible, and lack of experience at this level along with slight hesitation saw me struggle to keep my spot in the pack. An ongoing hip injury didn’t help me, as we set off up the first hill, the pain was triggered and I lacked power to remain with them. This here, essentially, was the end of my race panning out how I would have liked. The athletes I had targeted were in this chase pack, and with only myself and one other cyclist behind working together, we had no chance of catching the 8 strong chase pack any time soon. The gap on each lap increased, and we waved goodbye any chance of getting them, instead targeting athetes who had been left from the chase group, who had struggled to keep up with their pace. 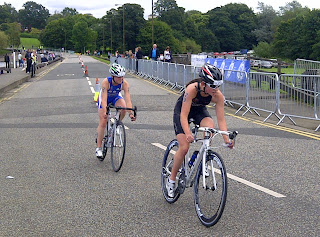 Although I am yet to see times, the 5km run felt good, working to catch up the chasers, it was frustrating knowing that’s where you should have been. A mental battle to keep going, but I got there. Overall finishing position is unknown, hopefully we will see some results in the next 48hrs and I will update this.

Like Blenheim, my frustrating race came down to T1. This time in a different way, but essentially lacking the speed and precision that these more experienced athletes have in forming bike packs quicly.  I have three weeks now until London (elite start) on the 23rd of September, which is my last race of the season, so I hope to bring it all together, and not have the same problems as today.

However, despite coming away pretty gutted, disheartened and kicking myself, I guess I have to look back at my first year in this sport and be proud of what I have achieved. The competition in elite racing is high, a million miles different from age group, todays case, it was world-class, and it was a privilege to be racing against some of those athletes, as you can learn a lot from it. At the start of this year with my empty race CV I didn’t expect to get into any elite races, I swam over 6 minutes a year ago for 400m and last month swam 5.15, I couldn’t bike 20km in under 40minutes and now I’m racing with some of the best elites in Great Britain.  My times are still coming down, my motivation is high, and I’m not running out of areas to improve on! So 2013…watch this space! 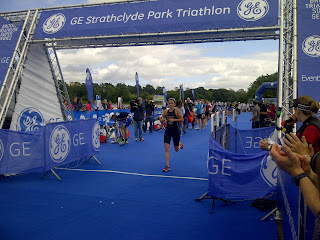